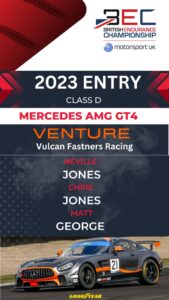 As promised: the second part to our two-car British Endurance Championship release. The Venture-run Vulcan Fasteners Mercedes AMG GT4 returns for a full season after a taster at the end of the last year. The now extended line up includes father and son due Neville Jones and Chris Jones alongside pro driver Matt George. Having run at the sharp end of their individual classes the two Venture-run cars return with the aim of a strong championship assault. It’s a pleasure to have them with us for the 2023 season.