Round 6 Report: Marrs and Jackson Win the Race and Seal the Title 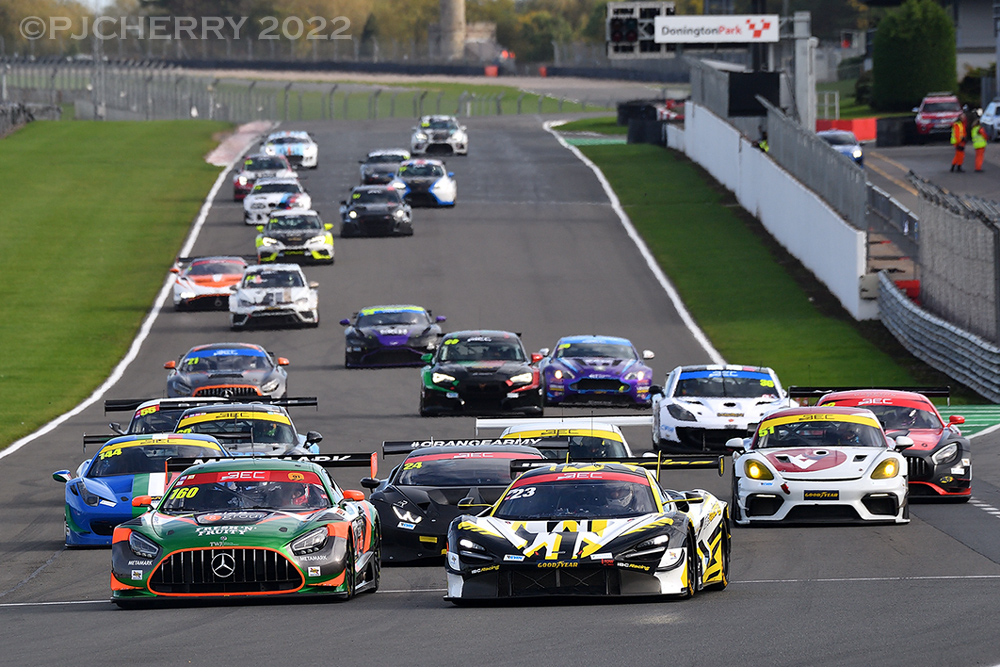 Wayne Marrs and Tom Jackson, in the Rob Boston Racing Mercedes GT3, wrapped-up the season with another overall win at Donington, and claimed the British Endurance Championship title by the slender margin of just two championship points over the RNR Performance Ferrari 458.

The day had started well for the eventual winners, annexing pole position on the grid, and sharing the front row with the Invitation-entry Greystone McLaren of Iain Campbell and Michael Broadhurst, and when the red lights went out for the rolling start, Campbell muscled the McLaren around the outside of Marrs’ Mercedes at Redgate into the lead, while in mid-pack, Dave Benett’s Porsche spun, initiating a shunt for Sam Randon’s Team Hard Ginetta G55 and the Team BRIT Aston Martin of Andy Tucker. All three were on their way again, but the Ginetta had lost it’s bonnet, causing Randon to pit for a replacement, and the first of three early Safety Car deployments, to clear the debris. The caution lasted for just one lap, and once released, Hugo Cook’s Mercedes was on the move, coming through from a penalized grid slot to take second place and lay some manners on Campbell’s leading McLaren, though the invitee was having none of it, and mounted a robust defence, which lasted for just half a lap, when the Safety Car came out again, this time to recover Chris Murphy’s BMW GTR from McLeans, with Scott Symons’ VW TCR making it’s way smokily to the pits indicating there had been an incident; both cars would go no further. It was a two lap caution this time, and only one racing lap before the third time that the busy Safety Car re-appeared, Ash Woodman’s Cupra had slid on the wet grass and gone backwards heavily into the tyre wall – recovery, and a re-build of the barrier meant that this would be a longer caution, seven laps in fact, with the opening of the pit window falling halfway through. A little early, perhaps, but many took the advantage, with some first drivers rejoining for a second stint, though title contender Chris Goddard, having diced, on the few green-flag laps, with the Porsches of Carl Cavers and Peter Erceg for the Class C lead in the RNR Ferrari, handed over to middle-stinter Jamie Stanley. Campbell had not vacated the McLaren but was back into the pits after just one lap, struggling with a power steering issue that was rectified by the flick of switch – he was on his way again, but with some work to do. If a car had a good reason NOT to come into the pits, it was the Newbarn Racing Jaguar F-Type, and Adam Thompson was relishing a good run in a midfield position, dicing with new rivals, though electrical problems set-in during brother Callum’s stint, dragging the car down the order into eventual retirement, though Adam’s performance had been enough to earn him the Sunoco Driver of the Day award, while also not going the full distance were the Team BRIT Aston Martin, visibly struggling for the right gear, and the Jonathan Beeson / George Heler Audi TCR. 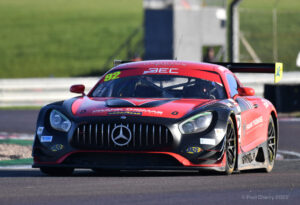 So with an out-of-sequence field, we had Hugo Cook’s Mercedes, sticking to a pre-determined fuel strategy, in the lead, ahead of the BMW Z4 of Kevin Clarke, who had obviously played his pit stop well with the Safety Car, and Carl Cavers in the Valluga Porsche. Behind them, Lee Frost’s Lamborghini and Marrs in the Mercedes were recovering from their first stops, Gleb Stepanovs was holding steady in the Aston Martin Vulcan, and Alex Day and Brad Thurston were disputing the TCR class lead. Once Cook pitted the red Mercedes to hand over to Sacha Kakad, Clarke assumed the lead, but had Lee Frost’s Lamborghini coming up fast behind, and while the two Brummies diced spiritedly for a while, Frost took the lead, but Clarke maintained a gap that was barely more than one second, until they pitted on consecutive laps around the halfway mark. Then it was Kakad who took the lead again, though, with just less than an hour of the race left to run, the majority of the heavy hitters had made their second stops, and Kakad would have to hand the red Mercedes back to Hugo Cook before the final 20 minutes. Tom Jackson had now relieved Marrs in the green Mercedes and was running second, and Lucky Khera, having replaced Frost in the Lamborghini, was closing up on Ian Lawson, who was now in the BMW Z4 started by Clarke. Charlie Hollings was now taking the final stint in the title-chasing Ferrari previously driven by Goddard and Stanley, behind the class-leading Porsche of Carl Cavers and Lewis Plato, which still had to make it’s second stop. Once those stops had been taken, and the pit-window closed, the officials did some reckoning-up of the pit-stop infringements, and there were a flurry of penalties to be taken, significantly some of the leading cars – drive-throughs and stop/go for the Frost/Khera Lamborghini, the Campbell/Broadhurst McLaren, and the two potential race-winning Mercedes of Marrs/Jackson and Cook/Kakad. Unaffected by this were the Class C frontrunners, with Marcus Clutton, now in the Porsche started by Peter Erceg, taking chunks out of Charlie Hollings’ lead. Jackson’s Merc retained the lead after it’s drive-through, and soon put another lap on Hollings’ Ferrari, and while Jackson took a couple of slowish laps to consider his fuel-save options, the Porsche was closing down on the Ferrari, and Cook was joining the fray too, though a lap ahead, anxious to get his own lap back on the race leader. Time was running out though, and with just minutes of the race left, Hollings tripped over a kerb at the Esses, and Clutton was through to the class lead. Cook got through too, and provided the Mercedes brand with a photo finish, though still a lap down on the winner. 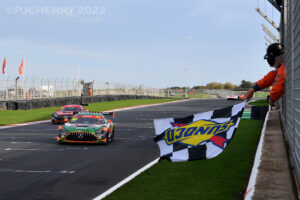 So, Wayne Marrs and Tom Jackson claimed the victory, and the title, nursing a vibration and finishing three-quarters of a minute ahead of Lee Frost/Lucky Khera, while pro-driver Michael Broadhurst had done a sterling job of hauling the Greystone McLaren started by Iain Campbell up to third place, just short of a minute adrift on the lead lap, after the additional pit-stop to rectify the PAS issue, Cook and Kakad were a lap down in fourth, while Ian Lawson capitalized on Kevin Clarke’s first stints to bring the Ing Sport Z4 home fifth in Class A; such was Clarke’s performance, just two weeks after sustaining injury in a severe crash at Oulton Park, that he was awarded the trophy for Outstanding Achievement. Finishing sixth in class was the Venture Innovations Aston Martin Vulcan, Gleb Stepanovs and Steve Tomkins having a low-key race. 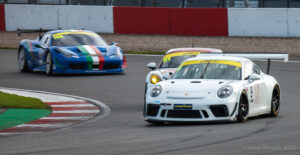 The Class C win by the Erceg/Clutton Porsche denied Goddard/Stanley/Hollings the overall title, bitter disappointment after they had held a slender lead going in to the meeting, though they did claim the class title in the RNR Ferrari 458, and after some impressive recovery stints following a first-corner spin, the Porsche of Dave Benett/Marcus Fothergill and Johnny Mowlem was third in class, ahead of Carl Cavers and Lewis Plato, who had contended with an underpowered Porsche Cayman as a last-minute replacement for their Ferrari.

Peter Montague, assisted by pro-drivers Stuart Hall and Dan Brown, was delighted to take the Class D win – and the title – in the MKH Racing Aston Martin, ahead of Neville Jones and Matty George in the Venture Innovations Mercedes, and as always, Team Hard never gave up, bagging the final class podium spot for Sam Randon and Will Orton’s Ginetta G55, making substantial repairs after being caught up in that first corner shunt. Alex Day and Will Foster had spun the TCR trick of taking two late-ish stops in the CTR-Alfatune SEAT, and had always been the front-runner through the race – they claimed the win, and the class title, finishing ahead of invitees Brad Thurston and Will Powell in the Motus One machine, with the remaining EDF SEAT of Nick Hull and Richard Avery rounding off an enjoyable season with third place, while Jamsport’s Simon Tomlinson stretched the late-stop strategy to it’s limits, finishing fourth in class in his SEAT. The demise of some worthwhile classmates meant that Mark and Jake MacAleer had little competition on their way to the Class F win in the RVR UK Racing Porsche 997, and they unsurprisingly took the class title too.