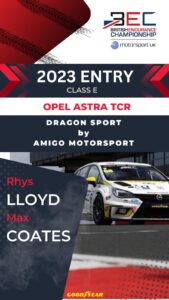 Rhys Lloyd and Max Coates will be behind the wheel of the eye catching TCR car but will see Yannick Mettler take the seat in place of Max at the Brands Hatch Indy round of the championship.

After podiums at both Oulton Park and Silverstone GP, the team is aiming for race wins and ultimately the class championship and are hoping that improvements made to the balance of performance of the car at the end of the 2022 season will pay dividends.

The emerging Dragon Sport team was out in force at the end of November for the teams inaugural scholarship event in which Jack Meakin was crowned the winner, alongside Jake Hewlett, Travis Coyne and Harry Hickton as Dragon Sport Academy drivers and ambassadors.

On returning to the British Endurance Championship Lloyd said “We are naturally excited to be returning to the series in 2023 and are sure with our learnings from last year and developments to the car, that we will be in a good position to challenge for class honours. It’s been a busy few months for the team and we have had lots of exciting conversations as we continue to grow from our scholarship last month.”