EDF’s Woodman and Byford Back for BEC 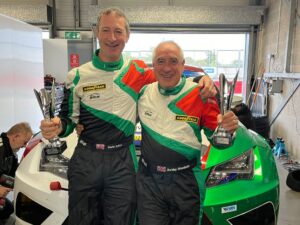 Finishing third overall, and second in Class 4 in 2021, the familiar Britcar pairing of Ashley Woodman and Martin Byford are the latest signing for the new British Endurance Championship for 2022.

Team manager Eddie Farrow said, “myself and the team at EDF Motorsports are pleased to be entering the new British Endurance Championship for the 2022 season. We are Really proud to be entering with Ashley Woodman and Martin Byford again. We had a great year last year ended up 3rd in the Championship overall, with Ash taking The ‘Driver of the Year’ title, which as a team we thought he thoroughly deserved. This new Championship is a great step forward for Claire and her Team at Britcar and we support them wholeheartedly. We look forward to seeing everyone at the 1st Round and competing for the title.”