We knew that the prestige of the 2022 British Endurance Championship would attract some top-line entries, and among the first to sign up are Stanbridge Motorsport, with a trio of Lamborghini Super Trofeos.

Stanbridge Motorsport started in 2005 when team owner James Simons progressed from track days to racing an MGB. After becoming Novice Champion. Progressing then to BARC Formula Renault was a big jump and it took James several years to adapt to single seater racing in championships like F4 and Monoposto, though he continued with single seaters and switched to F3 Cup in 2012, along with now running customer cars as well. The 2012 season saw James take several podiums and class wins in his well known Dallara, then as grid numbers dropped, a switch to GTs and Prototypes was needed.

James ran several customers successfully in the Radical SR1 Cup, a Norma CN Car in the Dutch Supercar Series and some historics in the Spa 6 hrs before the team built a Lotus Evora GT4 car that James raced with long term friend Fraser Smart in a GT series This was a massive achievement and got the team great exposure with several podium finishes and some great results in the wet, and the team had also started to run Chris Kemp in his GT4 Aston.

But as with all contemporary formulae, things had moved on performance wise, and the team studied the best value performance available and decided the Lamborghini Super Trofeo was the right car to continue in a GT series, having a successful first season with the Lamborghinis topping the timing screens against some faster GT3 machinery and contending for the team championship until some bad luck and a few incidents didn’t give the finish hoped for. 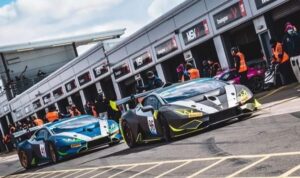 James Simons says of the forthcoming season: “We now have three cars, with the driver line up is yet to be finalised, we have some names that will be racing with us in 2022, and others are still in discussion in the new BEC Championship”

The drivers signed up so far are Chris Kemp, Stuart Hall, Graham Wilson, Fraser Smart, James Simons, Adam Hatfield (who has sampled Britcar success previously), and Ian Heward, a name familiar to Britcar followers for many years, and a popular winner when the championship visited Spa a few years back.

The British Endurance Championship welcomes Stanbridge Motorsport and wishes them every success.