Round 5 Report: Mercedes 1-2 After Penalty Shoot-out

Wayne Marrs and Tom Jackson took their third win of the season at Donington, in the Rob Boston Racing Mercedes GT3, but it was the similar car of Hugo Cook and Sacha Kakad that dominated throughout the race, their potential victory thwarted by the application of heavy penalties as the race came to a close, for pit stop infringements.

The two Mercedes lined up on the front row of the grid, with Marrs on pole, but it was Cook that stole the lead on the run up to Redgate, with Jonny MacGregor feistily muscling his Taranis down the inside from the second row to challenge for the lead as the pack went into the corner. Marrs had dropped back behind Lee Frost’s Lamborghini, and was rubbing door handles with the Ing Sport BMW Z4, with Kevin Clarke taking the opening stint.  The usual first-corner melee claimed Grant Dalton’s GT4-spec Mercedes, spinning into the gravel and causing a quick intervention of the Safety Car before the race could really get started. Once the race did get going again, it was Lee Frost in second place, as Cook’s red Mercedes began to pull away at the rate of around two seconds a lap, while further back, a close bunch of TCR machines, led by the Cupras of Alex Day and Stewart Lines, were harrying the GT4 Mercedes of Neville Jones and the Aston Martin of Perter Montague. Day broke clear first, and with a clear track ahead of him rapidly established a 10-second gap back to the squabbling TCR contingent.  Early pit visits came from Josh Hislop in the Team HARD Ginetta G55, with gearbox issues, and Callum Thompson, who had picked up some places in the Jaguar F-Type before this unscheduled stop. 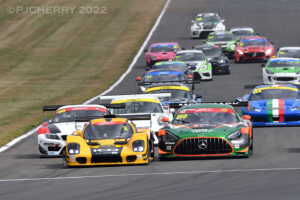 Bitter disappointment for the Taranis team, knocked out by suspension damage

In Class C, Peter Erceg, in his re-fettled Porsche, led Carl Cavers’ Ferrari and Mark Cunningham’s Porsche in a close-coupled line, and just 15 minutes in, Rhys Lloyd’s Dragonsport Opel Astra pulled off in the inside of Redgate after the engine let go, and the following Cupra of Ash Woodman found some of the oil, spinning off into the gravel, and causing another deployment of the Safety Car. With the pit window about to open, this would be an opportunity, though somewhat early for some, to take the first mandatory stop. Woodman, quickly recovered from the gravel, lurked at the pit entry until the clock ticked over, and was first in, followed by around 25% of the rest of the field, including fourth-placed Marrs, and maybe a bit too late to gain anything, Frost’s second-placed Lamborghini. Once the caution was lifted, Cook’s 21-second advantage was down to four seconds, with the Taranis now second, and in Class E, Alex Day’s ten-second lead over lone-driver George Heler’s Audi RS3 was decimated, with both drivers posting pretty similar lap times. Kevin  Clarke’s pursuit of MacGregor’s Taranis for second place came to an end when the MacG machine pitted with terminal suspension damage; Clarke pitted the BMW around 45 minutes in, handing over to middle-stinter Ian Lawson, while Hugo Cook pitted a lap later, now a lap ahead of Peter Erceg, who had earlier confided that he intended to take his Porsche deep into the race before pitting, and long he did go, leaving it to the halfway mark of the two-hour race before handing over to Marcus Clutton, and by this point Sacha Kakad had retaken the lead in the Mercedes started by Cook. 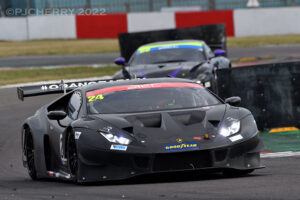 Debris on the pit straight caused another Safety Car period with 47 minutes of the race left, though did little to affect the order at that point, and there was precious little green-flag running once the caution was lifted, as Ryan Lindsay, now in the Ing Sport BMW Z4, ground to a halt coming out of the chicane with the front brakes jammed on (due to the underfloor exhaust overheating the pedal box), so the Safety Car was called again to facilitate what proved to be a particularly difficult recovery. There would be less than half-hour of race time left once the track went green again, and Kakad’s leading Mercedes took it’s final stop just inside the window. Coming out just three seconds ahead of Tom Jackson, now in the Mercedes started by Marrs, but as previously, two seconds per lap was the pace that the leader pulled away, and the gap was up to  24 seconds, just minutes from the end, when the officials slapped a pair of considerable time penalties on the leading Mercedes, for pit stop infringements, gifting the win to Jackson and Marrs, who were shown as being a minute ahead of Cook and Kakad after the penalties were applied. Nevertheless both teams had driven great races, neither taking advantage of pitting under the frequent caution periods and sticking to their own strategies, which in the case of the winning team, was a slightly under-the-weather Marrs going riht through the first hour. Third-placed Lee Frost and Lucky Khera got on with the job in the RaceLab Lamborghini Huracan, and the Ing Sport BMW Z4 of Clarke/Lawson/Lindsay had done enough of the race to be classified fourth in Class A. With no Class B runners, Class C cars filled the next spots,  with the RNR Performance Ferrari 458 claiming the class win, narrowly avoiding an extra stop to remove a rear diffuser that was dragging, after the errant component came adrift naturally; Jamie Stanley boosted the already-capable line-up of Chris Goddard and Charlie Hollings in the car, and they finished nine seconds ahead of the Peter Erceg/Marcus Clutton Porsche 911, which had stuck to the pre-arranged script and not had the strategy influenced by Safety Cars. A few laps adrift was the similar car of Marcus Fothergill/Dave Benett/Johnny Mowlem – Fothergill had lost out on track position during an early caution period, but third place in class was redemption for early-season retirements due to head gasket issues, and missed rounds due to replacement parts delays. The 997 of Mark and Peter Cunningham was fourth, though Mark had worried the class leaders earlier on, and the Valluga Ferrari 458 of Carl Cavers and Lewis Plato finished atypically down the order after mid-race issues.

The Motus One Ginetta G55 of Will Powell and Matt Cherrington took Class D honours; Cherrington had trailed the Team BRIT Aston Martin in the opening laps, but soon established a class lead that he and BEC-returnee Powell would never relinquish, a solid performance from two accomplished drivers, though, since they were an Invitation Entry, the top points went to Venture Innovations Mercedes, Matty George having hauled it up the order after Neville Jones’ opening stint, finishing a minute ahead of the Aston Martin of Peter Montague and Stuart Hall, the whole top three picking up penalties for track limits or pit-stop infringements along the way. Team BRIT’s Chris Overend was promoted from the Trophy team for this round, and led the class for a few laps in the Aston Martin at the start, but somehow it didn’t come together for him and Andy Tucker in this race, fifth place not a reflection of their potential form. The Breakell Racing Mercedes lost laps at the start after Grant Dalton was punted-off into the Redgate gravel, but experienced Radical exponent James Breakell recovered to finish fifth in class, while Sam Randon, after serenading the Team HARD pit crew over the radio to take his mind off his Ginetta stuck in fourth gear, found the gearbox had righted itself towards the finish, but by then there was little scope to atone for the issues he and Josh Hislop had endured. 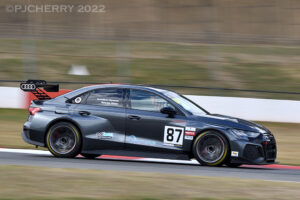 George Heler, driving alone in the Sheard Autosport Audi RS3, had taken the Class E lead from Alex Day’s Cupra after the second caution was lifted, and held it to the finish, clinching not only the class win but the coveted Sunoco Driver of the Day award too. With his win not in danger, nevertheless Will Foster, who had taken over the CTR Alfatune Cupra from Day, was chipping away at the lead, and second place was the team’s best result yet, gaining them the BEC trophy for Outstanding Achievement of the Weekend. Also chipping away was Max Hart, the young Irish TCR expert helping Mark Havers to third place in the T4 Motorsport Cupra, while EDF’s Cupras finished fourth and fifth, though it was the Nick Hull/ Richard Avery example ahead this time, Ash Woodman’s unfortunate opening stint leaving Martin Byford with work to do, which he did, posting the class fastest lap in the process. Early front runner Stewart Lines handed the Motus One Cupra to Anton Spires, but the car went sick, and  finished, down on power, sixth in class, while lone driver Simon Tomlinson retired the Jamsport SEAT just before the first hour elapsed.

In Class F, the Porsche 997 of Mark and Jake McAleer mixed it with the midfield pack, finishing 17th overall, and classmates Newbarn Racing, with Adam and Callum Thompson driving a usual, made it through the first hour in the unique Jaguar F-Type. 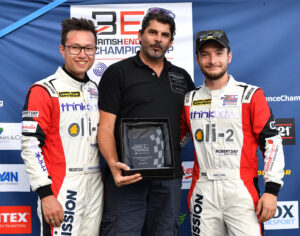 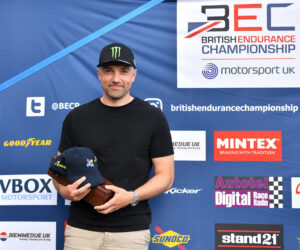 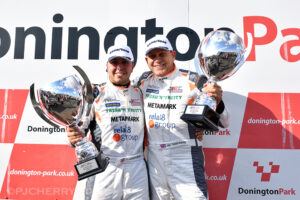