Round 4 Report: Marrs Today Worked, Rested, and Jackson Played to the Win 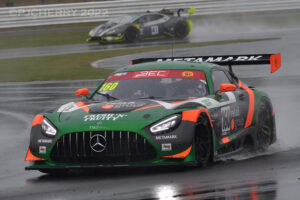 Wayne Marrs and Tom Jackson scored their second win of the season in the Rob Boston Racing Mercedes GT3 on a rain-soaked Silverstone GP circuit. It came to them after the first round of pit stops, and the overall lead of this race was all about three cars; The winning Mercedes shared the front row of the grid with the similar pole-sitting machine of Hugo Cook and Sacha Kakad, which was quite a feat considering they had only run the car in anger in testing the previous day, and it was quite a step up from their usual TCR experience, while ING Sport’s venerable BMW Z4 had severe gearbox issues – Kevin Clarke used all of his skills to get the best out of the beast to bag eighth on the grid, while Ryan Lindsay toured in fourth gear to complete his mandatory quota of qualifying laps. With a box full of neutrals 30 minutes from the start of the race, the team had some work to do.

Sacha Kakad took the lead at the rolling start, with Marrs  behind, and Clarke’s Z4 cutting through to third. Also cutting through the spray were James Little in the Valluga Cayman (14th to seventh), and Ray Harris in the Team Hard Ginetta G55, an incredible eighth place from 21st on the grid. Sadly it wouldn’t last long for the Valluga Cayman, a water pump belt failure calling a halt to James and Jake Little’s race after two laps, and just two laps later, a spin into the gravel for Grant Dalton’s GT4-spec Mercedes brought out the Safety Car. By this point, Clarke had moved up to second place, the BMW now seemingly running well, and once the caution was lifted, Kakad set about consolidating his lead, the top three now spreading out in the spray, while behind them Carl Cavers’ Ferrari was drawing away from returnee Mark Cunningham’s Porsche, these two the Class C frontrunners, though for Cavers this would be short-lived – caught out by standing water, a spin into the barriers damaged a rear quarter, and his race was run. 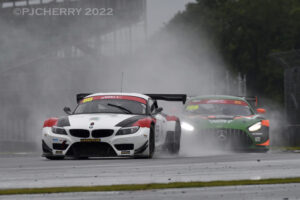 Kakad was the first of the top three to pit, handing the red and black Mercedes to Hugo Cook, and Tom Jackson relieved Marrs a few laps later. Clarke, though, having inherited the lead, held out till the bitter end, pitting on the cusp of his 60% maximum stint time – “ I was relaying messages to the team about track conditions, and told them to call me in when they’re ready” he told the pit lane commentator. Ryan Lindsay took the Z4 to the finish, stopping again just as the pit window was closing, while Kakad got back into the Simpson Mercedes for a final stint, and Marrs sat out the closing stint, leaving Tom Jackson to take the Rob Boston-run Mercedes to the flag, 42 seconds ahead of Kakad, despite having to take a stop/go penalty along the way, while Lindsay brought the BMW home a further 46 seconds adrift. All three had performed exceptionally in the atrocious conditions, and the work of the ING Sport team to get the BMW Z4 to the grid, plus Kevin Clarke’s assertive performance in an older car, was rewarded with the Outstanding Achievement Award. 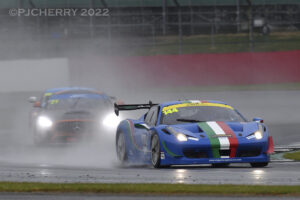 Behind the top three, a lap down, came the class winners, with Race Lab claiming fourth and fifth overall; Class B was taken by the menacing Stealth-like Lamborghini Super Trofeo of Claude Bovet and David McDonald; they had led throughout, with the podium places up for grabs in the final laps. The Stanbridge Lamborghini Huracan of Chris Kemp and Dan Brown had held second for most of the race, though Johnny Mowlem was now in the AF Corse Ferrari 488, started by novice William Tewiah, the Ghanaian businessman having made a cautious start. Mowlem’s assault caused Brown to mount a defence, claiming the class fastest lap in the process, but a last-knockings pit stop stymied the Lamborghini, and Mowlem was just five seconds ahead at the flag. Race Lab’s Porsche Cayman, running as an Invitation Entry for Ian Gough and Euan Hankey was the first Class D car home, though the winning class points were taken by Peter Montague and Stuart Hall in the T7 Motorsport Aston Martin Vantage, the best result for the pro-am pairing this season, with the Venture Innovations Mercedes GT4 of Neville Jones and Matt George next up, George receiving the Sunoco Driver of the Day award for his qualifying lap of 2:08.556, conditionally reckoned to be the fastest lap by a GT4 car around the Silverstone GP circuit. Third in class was the Team Hard Ginetta G55 OF Ray Harris and Josh Hislop, assisted by that storming start by Harris, while Team BRIT’s Andy Tucker and Luke Pound were atypically the fourth-placed points scorers in the Aston Martin Vantage, ahead of the similar machine of stablemates Dale and Mark Albutt. The best Class C finisher was the  12th-placed RNR Performance Ferrari 458 of Chris Goddard and Bradley Ellis. Goddard’s opening stint was blighted by gearbox issues, allowing Mark Cunningham’s SG Racing Porsche to lead the class after the demise of the Valluga 458, but there was a change-around in the second half of the race, mid-stinter Peter Cunningham unable to stave-off Ellis’s drive in the Ferrari, the gearbox electronics now re-jigged. Still, second in class was a surprise for Mark Cunningham; “I’ll take that, thank you!” he exclaimed, adding “I am two seconds quicker than I have ever been around here, and I’m still two seconds off the Ferraris” 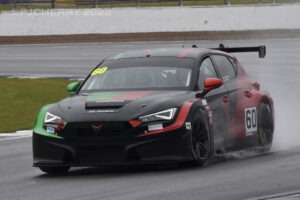 After a fallow period, with dire mechanical woes, it was back to the top step of the Class E podium for Ash Woodman and Martin Byford in the EDF Cupra  Competicion; a fired-up Woodman wasted no time in getting the car in a front-running position, having “the best race I have ever had in the wet”, and pro-driver Byford maintained to position to the flag, the Cupra of EDF stablemates Richard Avery and Nick Hull had a late-race trip into the gravel on it’s way to fifth in class, while between them second-placed Alex Day and Will Foster endured turbo issues in qualifying and limp-mode concerns in the race in the CTR-Alfatune Cupra on their way to one of their best results yet, and similarly Rhys Lloyd and Max Coates were first-time podium visitors in the Dragon Sport by Amigo Motorsport Opel Astra, despite a post-race penalty for over-exuberance, ahead  of the Motus One Cupra of Brad Thurston and Matt Cherrington, keeping the ball rolling for Stewart Lines. The brand-new Sheard Autosport Audi RS3 TCR of Jonathan Beeson and George Heler made the early class running, but an early unplanned pit stop, followed by an off-track excursion in the wet conditions saw then sixth in class, while, with the early retirement of the Newbarn Jaguar F-Type, Mark and Jake McAleer had Class F all to themselves again in the RVR Porsche 997. 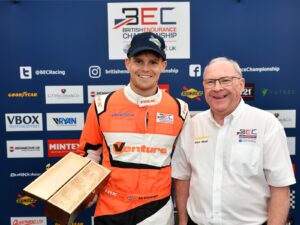 Matt George receiving the Sunoco Driver of the Day award for his qualifying lap of 2:08.556, conditionally reckoned to a GT4 lap record for the Silverstone GP circuit 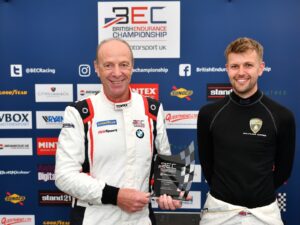 The Outstanding Achievement Award award went to the ING Sport team to get the BMW Z4 to the grid, plus Kevin Clarke’s assertive performance in an older car to land P3