Round 3 Report: Khera Wins With Thanks to Hankey 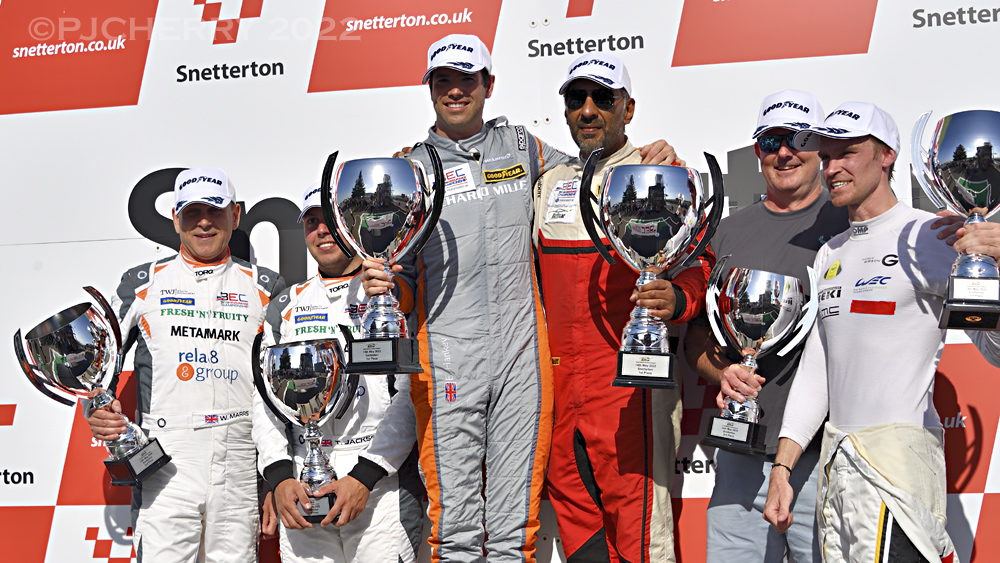 Lucky Khera and Euan Hankey, driving the 7TSIX team’s McLaren 720S, had to fight hard to take the win in a three-hour encounter that saw a fair amount of attrition for some significant runners.

This was the newly-formed team’s only third event (after two rounds of BGT), and with Khera’s Lamborghini out of action, the peripatetic Punjabi had organized the GT3-spec McLaren and regular driver Hankey, and the car attained pole position on the 26-car grid by a country mile, two and a quarter seconds ahead of the Venture Innovations Aston Martin Vulcan, with Matt George sharing the car with Steve Tomkins for this event. The Scott Sport Lamborghini of John Dhillon and Andrea Amici set a time in Free Practice that would have placed them on the front row, but in the continuation session for qualifying, they fell back to fifth, and the recovery to the front of the pack would be a feature of the early part of the race.

Khera took the lead as the red lights went out, with Tomkins close behind, while making places immediately were Kevin Clarke’s BMW Z4 and Peter Erceg in the just-repaired Porsche 911, with Luke Pound making significant progress from 23rd on the grid in the Team BRIT Aston Martin Vantage. John Dhillon had made progress too, and was on the tail of Wayne Marrs’ Mercedes GT3, and wasted no time, his Lamborghini taking the Mercedes at Wilson on the second lap, and getting away, bringing a massive gap to the second-placed Vulcan down to nothing in the space of four laps, and seizing second position. Meanwhile, a close-coupled train of Claude Bovet’s Lamborghini, Iain Campbell’s similar machine (recovering from a pit-lane start) and Carl Cavers’ Cayman was circulating at the top-end of midfield, while Rhys Lloyd was an early pit visitor in the Dragonsport/Amigo Astra TCR, overheating due to grass in the radiator after a try-too-hard moment at Coram. Talking of TCRs, the cars of Alex Day, Jonathan Beeson, William Casswell, Richard Avery and Stewart Lines were circulating line astern. Most of the class would get a shot at the class lead during the race, proving the competitiveness of these machines. The Vulcan suffered a puncture, as did Clarke’s Z4 around the same time, and a little later, the Dragonsport/Amigo Astra too, adding to their litany of woes. Ash Woodman pitted the EDF Cupra soon after the window opened, the repaired gearbox was fine but he reported ABS issues; Martin Byford took over, while Peter Erceg’s race would end after just 12 laps, the PB Racing Porsche retiring with gearbox failure after Marcus Clutton took it out for an exploratory lap. Andy Tucker had pulled the Team BRIT Aston Martin off in the infield section, reporting no drive, but in fact the car was in the process of setting a small fire, Luke Pound’s vigorous opening stint having now caused some oil lines to fail and spray lubricant over the engine. Cue for the Safety Car, and, 21 laps into the race, maybe some mandatory pit stops.

At the front, Khera had been maintaining a steady eight-second lead ahead of Dhillon, with Marrs a lonely third, a minute adrift of the leading pair, these three the only runners on the leading lap. Khera took the opportunity now to pit, handing over to Hankey, while Marrs pitted and got back into the Mercedes, with no fuel added. In fact, the 7TSIX team had stretched the regulations by refuelling under the Safety Car, and the blue shirts upstairs took a dim view and awarded a 60-second stop/go penalty, with the Tomkins/George Vulcan and the Newbarn Jaguar also having their wrists slapped for identical transgressions. Dhillon pitted his Lamborghini once the field went green again, prioritising legal fuel strategy over Safety Car opportunism, handing over to Andrea Amici, as did Iain Campbell, being relieved by Oliver Webb in the Mtech Class B Lamborghini which had been third before it’s stop. There were just a few racing laps before the Safety Car was deployed yet again, this time to recover the MacG Racing Taranis which had stopped out on the circuit. Ben Sharich had maintained a good position in the top eight, getting up to fourth place before a drive shaft joint failed. Due to the unavailability of the favoured Albins joint, the team have been forced to use ersatz components, and after recovery and a lengthy pit stop, Jonny MacGregor took the car out for a few exploratory laps, but all was not well and the car was retired.

Once the caution was lifted, Hankey had an eight-second lead over Marrs, who had still yet to refuel the Mercedes, with Amici a further quarter of a minute back. Hankey and Marrs then pitted simultaneously, with Mercedes taking on fuel after Marrs’ double stint, and Tom Jackson taking over. The McLaren was back in again shortly to take it’s lengthy stop/go which had at that point only just been identified. Amici’s inherited lead in the Scott Sport Lamborghini was short lived, their impressive run stymied by diff failure which caused retirement just after the halfway mark, and they joined a list of retirements from potential class front-runners- The Stanbridge Lamborghini Super Trofeo of Chris Kemp and Benny Simonsen had endured a recurring wheel nut problem, the Class F Porsche of Mark and Jake McAleer had been smoky, and Steve Tomkins recounted a litany of issues with the Vulcan shared with Matt George: “A spin after being hit by a Lamborghini, replacing body panels, penalty for fuelling under the Safety Car, then lost fourth gear”. Other than that, then… 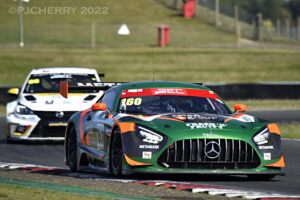 So with the Dhillon/Amici Lamborghini gone, it was the Mercedes in the lead again, with a 10 second buffer over the McLaren, which began to whittle down the lead by around a second a lap, stabilising at around three seconds. With around 45 minutes of the race left to run, the Mercedes pitted first, then the McLaren next time around, and at the timing line after the McLaren’s first flying lap, Jackson’s Merc was just a tenth of a second ahead. This was quickly despatched, and Hankey extended the lead lap by lap, finishing nearly half a minute to the good when the flag fell. “With the McLaren, it was inevitable, it just drove past me in a straight line” said Jackson to TV presenter Matt Suckling after the race. Third in Class A, eighth overall, was the ING Sport BMW Z4 of Kevin Clarke, Ian Lawson and Ryan Lindsay; Clarke had been the “best of the rest” against more modern machinery in his opening stint, but his early puncture was the first of a line of issues. ”I don’t know how we managed third, we’ve had the lot thrown at us today, punctures, penalties, pit stops…” said a bemused Lawson.

Third overall, and claiming the Class B victory, were Iain Campbell and Oliver Webb in the Mtech Lamborghini Super Trofeo – Campbell had performed a superb opening stint, making short work of getting the car into it’s true position after a pit lane start, and throughout the race they vied for the class lead with the similar Race Lab machine of Claude Bovet and David McDonald. It was a late pit stop by the Bovet/McDonald car that put them a lap apart at the flag.

Valluga bagged both Class C and Class D victories, fifth and sixth respectively. In truth, Carl Cavers and Lewis Plato had little to worry about in their Class C Cayman following the demise of the other class runners, though they didn’t hold back and raced as always, and the father and son duo of James and Jake Little had it less easy; James traded places with Michael McPherson’s Team HARD Ginetta G55 in the opening stint, but gearbox issues developed in the Ginetta, leaving Josh Hislop to struggle to the class runner-up spot, three laps adrift, while claiming the final Class D podium spot was the T7 Motorsport Aston Martin Vantage of Peter Montague and Dan Brown, which was sensibly parked-up on the penultimate lap due to oil pressure warnings. Rounding up the Class C result, usual front runners Chris Goddard and Charlie Hollings had a mare of a time in the RNR Ferrari 458 – they finished the race, though 27 laps down on the class winner, after some long pit stops; “Cat converter overheating, wiring getting hot, running lean, just managing the race to get the important points” were some of the comments from a philosophical Charlie Hollings. 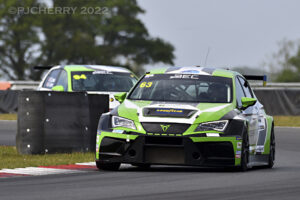 Class E, the TCR class; lots of action here, and a post-race penalty which affected the podium places. Alex Day led the group in the CTR Alfatune Cupra in the opening stages, with the similar cars of Johnathan Beeson and Will Caswell disputing second position, though as the first hour ticked over, the Golf of Anton Spires and TCR UK supremo Stewart Lines held the top spot. The lead alternated throughout the remainder of the race, after Beeson was relieved by George Heler and Brad Kaylor took over from Casswell, and at the flag the winning Caswell/Kaylor Cupra was less than two seconds ahead. However, a post-race review identified a pot lane infringement by the Beeson/Heler car, and they were handed a draconian 155-second time penalty, which dropped them down to fifth, behind the newly promoted EDF Cupra of Ash Woodman and Martin Byford, and hereby lies a tale. This team were ecstatic to stand on the podium anyway after a fraught 24 hours. Failure of a brand new gearbox during Friday testing caused consternation, though through tech wizard Jordan Bird’s contact list, they were able to get a Hewland engineer on site on Saturday morning to fix the sealed unit. Finished minutes before the qualifying session ended, Woodman was cautiously optimistic after his opening stint from the pit lane, but then Byford did what Byford does, and by mid race they were at the tail end of contention, this team effort bringing EDF the Outstanding Achievement of the Weekend award. Finishing off the podium, but nevertheless all worthy performers. The Alex Day/Will Foster Cupra, the Richard Avery/Nick Hull Cupra, the Spires/Lines Golf and the Cupra of Mark Havers and Max Hart all finished on the same lap after three hours of racing, while the early puncture and other issues endured by the Astra of Rhys Lloyd and Yannick Meitler sadly put them out of contention. Stewart Lines has created an ultra-competitive category for both his own championship, and for the endurance contingent. 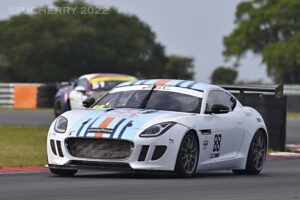 Finally a finish for the Newbarn Racing Jaguar F-type

It was success at last for Paul Murray’s Newbarn Racing, and their recalcitrant Jaguar F-Type. They had issues, not least multiple penalties for pit stop infringements, but they finished, and they finished first in Class F, with little competition after the demise of the Porsche of Mark and Jake MacAleer, the perseverance of drivers Adam and Callum Thompson earning them jointly the Sunoco Driver of the Day award.

For the next round we return to Silverstone’s GP circuit for a 2-hour race on 18th June.