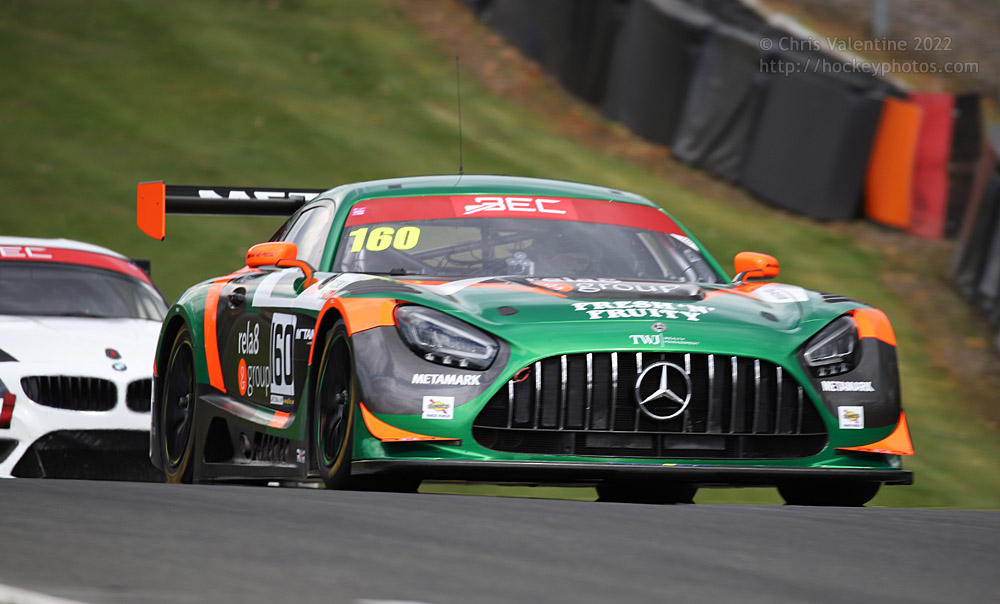 Wayne Marrs and Tom Jackson took a convincing win in Round 2 of the British Endurance Championship, their Rob Boston Racing Mercedes AMG GT3 finishing a lap ahead of lone-driver Jonny MacGregor’s MacG Racing Taranis in the two-hour race. But behind this headline is a story to be told.

So we’ll deal with the bad news first: the 50 minute free practice/qualifying session saw three significant contenders, all Round 1 class winners, eliminated – out with unrepairable accident damage were the Erceg/ Clutton Porsche 911 and the Lamborghini of Frost/Khera, while the EDF Cupra TCR of Woodman/Byford suffered catastrophic gearbox failure. Salvaging something from the depths though, were Valluga Racing, providing a Porsche Cayman for Carl Cavers and Lewis Plato after the booked Ferrari 458 threw a rod in testing, and Simon Green Motorsport, fixing an electrical problem in the Dodge Viper, then managing a mercy dash to Widnes to weld up a cracked oil cooler, to get Angus Fender on to the grid. 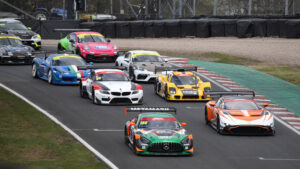 Wayne Marrs, in the pole-sitting Mercedes went into the lead as the lights went out at the rolling start, and Kevin Clarke’s BMW Z4 slotted into second ahead of Gleb Stepanovs in the Aston Martin Vulcan, while Jonny MacGregor had a spin in the Taranis, which dropped him to the back of the field, with some work to do. The leading pair pulled out a massive gap to the rest of the field, which was headed by Ollie Turner’s Team Hard Porsche 911, with Clarke continually on Marrs’ tail, but nine laps in, they hit traffic through Old Hall, and Clarke seized the moment – there was the hint of a sideswipe kiss as the BMW got a better run down the Avenue, and then began to pull away. Meanwhile,  Turner maintained a respectable distance ahead of Carl Cavers’ Cayman, Stepanovs’ Vulcan, Chris Goddard’s Ferrari, and a close-packed cluster featuring Dave Benett’s Porsche, Will Foster in the rejuvenated CTR-Alfatune SEAT, and the Team Hard Ginetta G55s of Ray Harris and Josh Hislop. Cutting through too, were MacGregor’s Taranis, and from the pit lane, Angus Fender’s Viper, both using old-school American cubic inches, and of course, no small amount of skill.

The Beeson/Heler SEAT TCR came to a halt out on the circuit with front left suspension damage, and there was an early unscheduled pit stop for Jake McAleer to fix the front splitter on his Porsche, the first of several stops, a rear-end knocking needing investigation a little later. 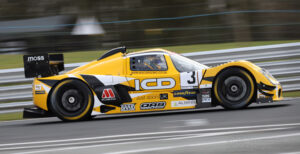 With the pit window open, first in was Peter Montague, handing the T7 Aston Martin over to consummate pro Stuart Hall. Dave Benett brought the Bespoke Defenders Porsche in a few laps later, handing over to Marcus Fothergill to take the middle stint of their three-hander,  while Ollie Turner also vacated his comfortable third place, though 40 seconds behind the leaders, being relieved by Callum Jenkins in the Team Hard Porsche. Not so Wayne Marrs, though – he was still in touch with Clarke’s BMW, and was getting his money’s worth of track time, leaving it until lap 31 to take the first stop, and handing over to Tom Jackson. Leader Clarke left it just a little later, Ryan Lindsay taking over and emerging from the pitlane just ahead of the Mercedes, which was back in front while Lindsay got up to speed. Not for long, though – the Z4 slowed, and pitted, a drive shaft failure signifying the end of a sensational performance. Jonny MacGregor consolidated his run from the back of the field by taking the lead for just one lap before pitting the Taranis, but the BMW’S failure wasn’t the only issue on that same fateful lap; Alex Day’s SEAT, the erstwhile TCR class leader in Will Foster’s hands, had come to a halt out on the circuit, also with a broken driveshaft, and Steve Tomkins, in the Vulcan started by Stepanovs, had a self-admitted lapse of skill and pitted, after a visit to the tyre wall, for some cosmetic adjustments to the bodywork; they would finish down the order, 12th overall, but still on the bottom step of the Class A podium. Adjustments were also required to the tyre wall, leading to the deployment of the Safety Car, which was an opportune moment to recover the Foster/Day TCR machine back to the pits for repairs. Once the field went green again, Jackson had a clear track ahead of him, and whilst he still had a good lead over the Taranis after the second round of pit stops, never let up, even punching in the fastest lap of the race a few laps before the flag fell, and finishing a lap ahead of MacGregor, who’s superb lone drive earned the Sunoco Driver of the Day award. 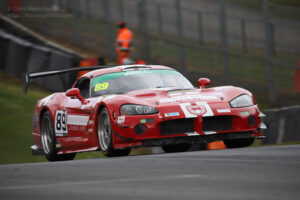 Marcus Fothergill had done a stunning middle stint in the Bespoke Defenders Porsche, running in sixth place as third driver Nigel Moore frustratedly waited in the pit garage for the Safety Car period to end, as refuelling was needed, though this would be another tale of woe, as Moore was back in only laps after taking over, an overheating issue finishing their day. And it was now that the men in serious trousers in Race Control began dishing out the penalties for pit stop infringements; Angus Fender’s Viper took a stop/go, as did Andy Tucker in the Team BRIT Aston Martin, which rather queered to pitch, as Tucker, after a really solid earlier stint by Luke Pound, was at that point in a three-way fight for the Class D lead. Tucker led the class, but Michael MacPherson’s Team Hard Ginetta, taken over from Josh Hislop, was closing in, and Jake Little, in the Valluga Porsche started by father James, was catching both of them. Tucker rejoined in third, but managed to claw back second place just before the finish. Leaving the Team Hard youngsters to claim the top step of the class podium. 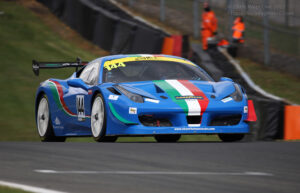 The battle for Class C honours was going down to the wire too, and this was also for third overall; Lewis Plato had taken over the Valluga Cayman from Carl Cavers and led the class, but as the clock ticked down was being reeled in by Charlie Hollings in the RNR Ferrari 358 started by Chris Goddard. The Cayman was less than a second ahead of the Ferrari at the flag, but the officials had noted an infringement by the Cayman, and issued a post-race one-lap penalty which dropped it to third, behind the Team Hard Porsche of Ollie Turner and Callum Jenkins, who had put in an impressive performance, with Turner running third overall before the first round of pit stops.

The Class B contingent gapped the top Class C and D finishers, Angus Fender’s faultless drive in a now faultless Dodge Viper bagging the class victory and sixth overall, and the Simon Green Motorsport team earning the Outstanding Achievement Award for their sterling work in getting the car raceworthy. They finished a full minute ahead of the RaceLab/Bovet Racing Lamborghini, pro-driver David McDonald storming through the order after relative novice Claude Bovet’s opening stint.

The Team Hard Class C Invitation entry of Ray Harris and Chris Murphy in a Ginetta Supercup came home 11th, with Harris initially running in the top 10, and the race’s other Invitee, the Team BRIT McLaren, finishing 14th after BGT aspirants Bobby Trundley and Aaron Morgan were using the event to gain experience for their upcoming campaign – “It felt strange being in a race, but not racing” said Morgan afterwards, though they led home several other Class D runners, including the T7 Aston Martin, in which pro-driver Stuart Hall posted the fastest lap in the class by some margin, the Aston Martin of Dale and Mark Albutt, and the McLaren 570s of reigning champions Dave Scaramanga and Will Powell.

The Class E positions were a lottery – led initially by the CTR Alfatune SEAT, which had found a lot more pace, until driveshaft failure and subsequent repair relegated them to a distant fourth, it was the Dragon Sport /Amigo Opel Astra of Rhys Lloyd and Max Coates and the Maximum Golf of Stewart Lines and Rob Butler that then made the running, and the result was all about the final pit stops, with the Maximum car electing to risk running on fumes and so pitting under the Safety Car, while the Amigo crew took a more cautious, waiting to refuel under green conditions, though a fuel spill over a rear tyre during the process necessitated an unexpected wheel change too. Lines took the Class win a lap ahead of Lloyd, with the EDF-run SEAT of Nick Hull and Richard Avery a further lap adrift after a solid run. Lone Class F runners, Mark and Jake McAleer, took the flag despite being delayed by several unscheduled pit stops.