With only 24 examples produced, the sight and sound of an Aston Martin Vulcan is a rare treat, and in a full racing situation, even more so. After a successful outing in Britcar Endurance in 2021, in the season closer at Donington, the stunning machine entered by Venture returns for the 2022 season, in the new British Endurance Championship. 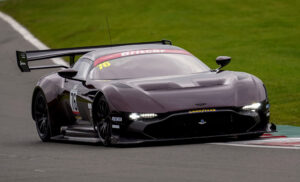 The Venture Vulcan as it appeared at Donington in 2021

Witney-based Venture operate as specialists in automotive and motorsport technology, providing innovative design, manufacturing, and consultancy services. Venture’s clientele includes Formula One, World Endurance and Hypercar Manufacturers, and is supported by a team littered with top level Motorsport experience. The Aston Martin Vulcan was previously seen in a subtle and sophisticated livery which somewhat masked the brutality of the aero accoutrements and the seven-litre V12 engine, will emerge for the 2022 season in a brand-new scheme which is currently yet to be revealed.

With a driver line-up unchanged from last-season’s Donington foray, the Venture Aston Martin Vulcan should be a significant contender in the British Endurance Championship.