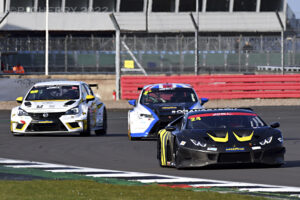 Lee Frost and Lucky Khera took a convincing win in the opening round of the British Endurance Championship on Silverstone’s GP configuration. Their Lamborghini Huracan GT3, run by the newly-formed Race Lab team only relinquished the lead for six laps during the first pit-stop sequence, and finished a lap to the good of the field when the flag fell after three hours of racing.

Being a new Championship, with some familiar runners, but with a host of new entries, and some untried and untested machinery, this heralded an exciting new era for endurance racing. Withdrawn after qualifying with steering rack problems was the Motus One McLaren of reigning Britcar champions Dave Scaramanga and  Will Powell, though welcome returnees John Seale and Jamie Stanley annexed pole in the FF Corse Ferrari 488 Challenge, with Peter Erceg’s fresh-out-of-the-box Porsche 911, shared with Marcus Clutton, alongside on the grid, leaving Lee Frost, starting the Lamborghini, back on the fifth row, but as the red lights went out, it was Gleb Stepanovs in the re-liveried Aston Martin Vulcan that came though from the second row to seize the lead mid-lap, while Frost, making the most of some gaps left by pit-lane starters, was able to challenge, and established a lead of one and a half seconds when the crossed the line for the first time. Also starting impressively were Jonathan Beeson in the Sheard Golf TCR, and James Little’s Valluga Racing Porsche Cayman, both making up multiple places, while some first-lap nudging saw Chris Goddard’s Ferrari 458 and Mark MacAleer’s Porsche 997 pit for inspection, and Mark Albutt’s Aston Martin needed recovering from the slippery grass, causing an early two-lap deployment of the Safety Car. 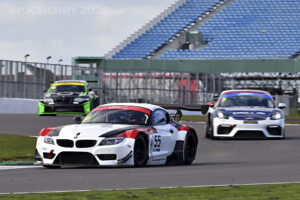 Once the field went green again, Frost began to consolidate his lead, 25 seconds by lap 10, while behind, the pit-lane starters were cutting through the pack – Wayne Marrs’ Mercedes, Ian Lawson’s BMW Z4, and Ben Sharich in the MacG Taranis – while Dave Benett, nursing a foot injury in the Bespoke Defenders Porsche 991, pitted as soon as the pit window opened 20 minutes into the race, handing over to Marcus Fothergill.  And that pit window, of 140 minutes duration, was more of a patio door than a window, though three mandatory stops had to be made, and it was around the 50-minute mark that the heavy-hitters began to stop.

So how best to report this race? Maybe a car-by-car approach rather than blow-by-blow report? Let’s give it a try, taking it from the winner downwards.

Frost and Khera; It was Lee’s early dominance that set the scene, he was over three-quarters of a lap ahead of Erceg’s Porsche when he first pitted, and the two equally-matched Lamborghini drivers were able to maintain that throughout the race. After six laps Lucky was back in the lead, with the stealth-black Lamborghini never being headed again. They were a lap ahead of the Marrs/Jackson Mercedes at the second stop, maintaining a 30-second buffer, and Lucky rejoined after the third stop the best part of a lap ahead of the Ferrari 488 Race Lab stablemates Bovet and McDonald, taking a commanding victory. The Venture Innovations Aston Martin Vulcan was second, with Gleb Stepanovs giving a spirited performance in his opening stint, while Steve Tomkins shone in his sessions,  and they finished a lap ahead of newcomer Claude Bovet, who had just test and trackday experience up to this point and was understandably cautious in the opening laps , partnered by the vastly experienced David McDonald in the Race Lab Ferrari 488, bagging the Class B victory in the process, and McDonald awarded the Sunoco Driver of the Day. Ing Sport had a successful return, Ian Lawson recovering well after a pit-lane start, and with the assistance of the usual assertiveness of Kevin Clarke in the BMW Z4, they were fourth overall and third in Class A.

Peter Erceg had sampled just a few laps of testing in the Porsche 911 that had acquired only days earlier, and the Britcar class champion was quickly into the groove in his new machine, scrapping with the amateur drivers around him. With pro-driver Marcus Clutton at the wheel, they were only around a second a lap off the overall winner’s pace, but progress was thwarted by the lack of dry-break refuelling capability, and pit stop times were doubled as the car was brought into the garage to be refuelled. Nevertheless, a terrific performance, taking fifth overall and the Class C win, and Erceg being awarded the Outstanding Performance trophy. Carl Cavers and Lewis Plato took the Valluga Ferrari 458 to second in the class; Cavers was another amateur who scrapped enthusiastically with those around him, and the similar RNR Performance machine of Chris Goddard and Charlie Hollings recovered well from that first-lap pit stop to claim third in class.

The conditions seemed favourable for the TCR machines; Jonathan Beeson made phenomenal, giant-killing early-race progress in the Sheard Autosport Golf, and George Heler complemented that performance, but they were beaten in the end to the Class E crown by the 10-day old EDF Cupra  Competizione of Ash Woodman and Martin Byford, the pair delighted to hit the ground running. The Team Hard pairing of Ollie Turner and Callum Jenkins were 10th overall in the team’s Porsche 991, employing a novel strategy of taking a long-stop to fully refuel at the half-way mark during Jenkins’ double-stint, while next up were a quartet of Class D GT4 machines. James Little had raised the bar in the opening laps, setting mixing with the GT3 runners in the Valluga Cayman, while Peter Montague and Luke Pound had held steady in their Aston Martins, but in the final few laps of the race, a battle came down; Andy Tucker had relieved Pound in the Team BRIT Aston, and led the class just ahead of Jake Little in the Porsche, while international star Stuart Hall joined the fight in the T7 Aston started by  Montague. For several laps positions were traded, and the T7 machine got ahead. Whilst disappointed at finishing second on the road, Tucker knew the score, confirmed when the amended results were issued, awarding major time penalties to T7 and Valluga for pit lane transgressions, and the win going to Team BRIT; “We knew they had penalties, we based our end strategy around it” admitted an overjoyed Tucker, with Pound, bagging a  class win on their first outing in a GT championship. The penalty for Valluga, in fact, promoted the Team Hard Ginetta G55 of young chargers Josh Hislop, Ray Harris and Michael McPherson to the final class podium spot.

Fifteenth overall was the Motus One Cupra TCR of usual Clio ace Anton Spires, partnered by TCR UK supremo Stewart Lines, recovering from a pit-lane start, and atypically well down the order was the FF Corse Ferrari 488 of John Seale and Jamie Stanley. Seale had performed his usual solid opening stint in the pole-sitting machine, though Stanley’s progress was thwarted by a long pit stop – “We’ve worn out the brakes” said Seale, as the team changed the pads. Still, second place in Class B salvaged something from the day, and it was a similar story for the final Class B finisher, the Stanbridge Motorsport Lamborghini Huracan ST. the erstwhile front-runners in other GT series being disappointed with their BEC debut. Team boss James Simons shared the car with Fraser Smart, the pair losing several seconds a lap driving around a coil pack issue, exacerbated by later wheel nut concerns; there’s obviously more to come from this team. The Class E field was completed by Nick Hull/Richard Avery Cupra TCR, now run by Eddie Farrow’s EDF team, and the CTR-Alfatune Cupra of Alex Day and Will Foster, both cars exhibiting similar race pace, while after qualifying third on the grid, the Opel Astra of Rhys Lloyd and Max Coates had a drive shaft failure running to the grid, and the newly-allianced team of Dragon Sport by Amigo Motorsport hurriedly fixed the car, though many laps were lost. Once they did join the race, lap times indicated that they could be top three finishers. Early unscheduled pit stops put the Aston Martin of Dale and Mark Albutt and the Porsche of Mark and Jake MacAleer way down in the results, though as lone Class 4 finisher, the MacAleers did take home a trophy. 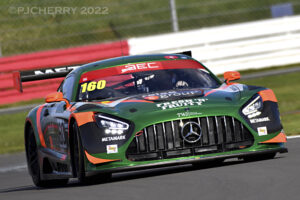 Bitter disappointment for the Mercedes GT4

There were some bitter disappointments for some significant contenders too. Expiring with alternator issues at two-thirds distance was the Mercedes GT3 of Wayne Marrs and Tom Jackson. Marrs, better known for his Ferrari exploits, cut through sensationally from a pit lane start in the Rob Boston-run car, and Jackson posted the fastest lap of the race during his stint. Stopping around the same time was the Woodrow BMW 1M; Chris Murphy made up ground from the back of the grid, but the sudden loss of the rear wing caused the team to salvage the complete boot lid assembly from their other 1M sitting in the garage, while once Mike Moss took over, driving around to bag some championship points with a fuel pressure issue was considered too risky. With Dave Benett’s short stint done and dusted in the Bespoke Defenders Porsche 991, Marcus Fothergill took over, but the plan to let pro-driver Johnny Mowlem double-stint to the flag was stymied by retirement due to head gasket failure, while the MacG Racing Taranis was retired with electrical gremlins shortly after Johnny MacGregor took over from Ben Sharich, and there further tales of woe for the Newbarn Racing Jaguar F Type, the team’s burning of the midnight oil to fix an overheating issue laid bare by a drive shaft failure after 12 laps, offering very little track time to Callum and Adam Thompson.