A new team will take to the grid when the inaugural British Endurance Championship gets underway at the Silverstone Grand Prix circuit on the 12th March.  Dragon Sport by Amigo will field an Opel Astra in the TCR category for series debutant Rhys Lloyd and returnee, Max Coates.

Welsh property developer and investor, Rhys Lloyd, heads up the Dragon Sport element of the new team. Hailing from Carmarthen, the 36-year-old has a long history in motorsport, formerly a Welsh Karting Champion in his youth. He started racing cars at the age of 17 but quickly switched discipline to rallying, ultimately finishing 73rd in the 2006 Wales Rally GB round of the WRC in a MG ZR Group N car. After winning the Welsh Sports and Saloon car championship in 2008, he took a 10-year sabbatical from motorsport to focus on his business ventures. Returning to endurance racing 2019 he has competed in TCR machinery in Europe and Dubai which included a win in the 2020 16 hours of Hockenheim in the Creventic 24hr series. For 2022 he will share an Opel Astra TCR with multiple Britcar race winner Max Coates.

Coates competed in Britcar in 2019 in a Seat Cupra TCR with Guy Colclough. Setting numerous pole position times during his races the pair finished 3rd in class.  Coates also took a double victory in TCR UK at Donington Park that year, driving the same car raced in Britcar at Oulton Park on the Saturday before Sunday’s TCR races.  Yorkshireman Coates has mainly been competing on the BTCC support package for the past 11 seasons, coming close to winning the Renault UK Clio Cup on multiple occasions.  He’s also a regular in the Britcar paddock, after competing himself in 2019 he became the driver coach for Team BRIT and the Heler & Beeson TCR entry from Paul Sheard Motorsport.

Running the operation will be Rob Gaffney from Amigo Motorsport, his team has been around Britcar for some time but is a new entry to the Endurance Championship. The Essex based squad have run Lloyd and Coates in various Citroen C1 races, including the 24hr at Silverstone last year where the pair drove in the same team with Gala Performance.  Commenting on their entry to the British Endurance Championship, Rob said, “We are Looking forward to working with both Rhys and Max this year and feel that it is going to be a successful partnership between us all. We can’t wait to show what the Opel Astra TCR car can do in this year’s championship.”

Equally Lloyd said “I am excited by the challenge of setting up a new team, working with Max and a new car, and entering an all new Britcar Endurance Championship in 2022. It’s all been a bit of a rush last few weeks as the car only arrived from Denmark in early February. We’ve completed a few test days and everything has gone well, we both seem to be on the pace and the team are learning how this new car works very quickly.”

Coates added, “The lure of endurance racing has been with me since the close of the 2019 Britcar season so when Rhys needed a driving partner I jumped at the opportunity.  We have been teammates before in 24hr races and I’ve known Rob since we raced against each other in 2012, so I feel very at home with everyone and I’m getting to grips with the car.  The majority of my racing is in a sprint format so this a great opportunity for me to widen my skillset and get involved in the endurance side of the sport.  We’ve got a few things to work on before round one but have a testing plan in place to ensure we are prepared.” 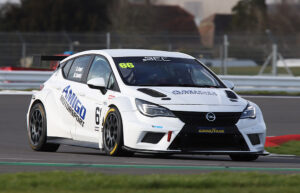 Since the car arrived in early February the team have completed two test days, one on Britcar’s exclusive event at Silverstone.  With another two tests lined up before the start of the BEC season on the 12th March, the pairing and team will be aiming for silverware from the off.