BEC Heads to Oulton Park for Round 2

Early April, and most major championships have yet to get going, but the British Endurance Championship is already into it’s second round, in the glorious Cheshire parkland setting. 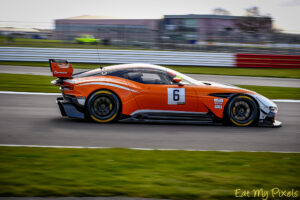 The Aston Martin Vulcan of Glebs Stepanovs and Steve Tomkins

Points have been scored, but maybe it’s a little too early to see a pattern emerge, and the wide open sweeps of Silverstone are a very different proposition to the leafy undulations of Oulton Park.

Reigning Britcar Endurance champions Dave Scaramanga and Will Powell came away from Silverstone with a zero points tally after steering rack failure during qualifying in the Motus One McLaren GT3, and the race was won in dominant fashion by the Racelab Lamborghini Huracan of friends reunited Lee Frost and Lucky Khera, though they didn’t score the max points; by dint of a clean sweep of class pole, win, and fastest lap , that accolade was shared by two fresh-out-of-the-box cars still in plain white livery, the Class C Porsche 911 of Peter Erceg & Marcus Clutton, and the Class E EDF Motorsport Cupra TCR of Ash Woodman and Martin Byford.

Three hours around Silverstone did take its toll on some of the Class A runners; whilst the stunning Aston Martin Vulcan of Glebs Stepanovs and Steve Tomkins, and the ING Sport BMW Z4 of Ian Lawson/Kevin Clarke went the distance without concerns, the Mercedes of Wayne Marrs/Tom Jackson and the Taranis of Jonny MacGregor and Ben Sharich both succumbed to mechanical issues. In the right conditions, any one of these cars has winning capability.

The Ferrari 488 Challenge of John Seale and Jamie Stanley

Currently riding high in the Class B points are Claude Bovets/David McDonald in a Lamborghini Huracan, though The Ferrari 488 of John Seale and Jamie Stanley was the star turn until brake fade caused a pit stop at Silverstone, while we haven’t seen the best yet of the Stanbridge team’s Lamborghinis; so successful in other series, they should return stronger here. Whilst the Erceg/Clutton pairing romped away with Class C at Silverstone, Carl Cavers and Lewis Plato’s Valluga-run Ferrari 458 was strong competition, as was the similar machine of Chris Goddard/Charlie Hollings, and if mechanical issues hadn’t halted the Benett/Fothergill Porsche, third driver Johnny Mowlem may have had an effect, while in Class D, pit-stop penalties influenced the result last time out, and Team BRIT adapted their strategy on the hoof to bag the class win, with Andy Tucker and Luke Pound performing exceptionally, moving up to the team’s Aston Martin. They are only one point ahead, though, of the similar T7 car of Peter Montague and international star Stuart Hall, who in turn lead by just four points the Team Hard Ginetta G55 of young chargers Hislop / Harris / McPherson.

In Class E, Jonathan Beeson showed blinding early-race pace in the  Golf TCR he shares with George Heler, while the smart Opel of Rhys Lloyd/Max Coates showed promise, and once the Newbarn Jaguar F-Type irons out its bugs it should prove competitive with Mark and Jake MacAleer’s Porsche in Class F.